Battle ropes are not inherently bad for your shoulders. Like any exercise, incorrect form or technique can result in injury. To get the best results from battle ropes without a shoulder injury, make sure you do not lean back or pull on the ropes during exercise, as this puts negative stress on your shoulders. Keep your back straight and your eyes up while using the battle ropes. Additionally, allow your body to move naturally with the ropes, absorbing the force of the exercise with your hips and legs. By using your entire body during a battle rope workout, you will reap more rewards and avoid shoulder issues.

Why Battle Ropes are Good For Your Shoulders

Contrary to popular belief, battle ropes can provide a lot of benefits to your shoulders. Controlling the flexible ropes, maintaining balance, and moving the ropes in symmetrical patterns activates small stabilizer muscles in your shoulders. These muscles are often not activated by traditional weight lifting exercises.

The shoulder is the most complex joint in the human body, with several muscles working together to keep your shoulder in place. In traditional weight training, it’s easy to focus on a single shoulder muscle, neglecting the others. This leads to muscle imbalances, puts stress on your shoulder joint, and makes injury more likely. Because battle rope movements work several shoulder muscles at once, when used correctly they can actually bulletproof your shoulders and help prevent injury.

5 Tips for Using Battle Ropes Without Injuring Your Shoulders

Most shoulder injuries that come from battle rope use stem from a misunderstanding of the equipment. This is understandable since battle ropes are still relatively new and not a part of traditional training equipment. Don’t dismiss battle rope workouts. They provide many health and strength training benefits. Simply follow our tips and you’ll get the benefits without risking injury.

When using battle ropes, don’t stretch them to their limit. Leave a healthy bit of slack in the rope between you and the anchor point. This prevents you from pulling the rope taut during your workout. Pulling on the rope will naturally pull your shoulders forward, moving them out of position and increasing the risk of injury.

Another bad habit to avoid is leaning back on the ropes during the middle of an exercise. Again, this pulls the ropes tight and puts an unhealthy strain on your shoulders. To avoid this habit, do not grip the ropes extremely hard. Keep your grip as firm as a comfortable handshake—just hard enough to avoid the ropes coming loose from your hands while working out.

Keep Your Back Straight

When starting any battle rope exercise, begin with a healthy neutral stance. In this stance, face the anchor point and stand with your feet a little more than shoulder-width apart. Keep your back straight, shoulders back, and eyes forward. Bend slightly at the knees, about one-third of the way into a squat position.

Throughout your battle rope exercise, make sure you maintain a straight back and prevent your shoulders from rolling forward. This proper form helps keep your shoulders in a healthy position where the muscles will be worked without straining or pulling them in dangerous ways.

Put Your Body Into It

Many who claim that battle ropes are bad for your shoulders say that this is due to the jarring stress of exercises where you slam ropes to the floor. However, proper battle rope form does not absorb this stress in the shoulders and upper body. Instead, keep your knees and hips loose as you use the battle ropes. Allow your hips to hinge and your knees to bend. This allows the inertia of the ropes to be absorbed by the lower body. Not only does this technique prevent injury, but it also turns battle ropes into a total body workout.

It’s much easier to maintain a straight back when you allow your lower body to move with the exercise. If you lock your lower body while using battle ropes, this bad form will put an unhealthy strain on your back and shoulders.

Use Your Legs for Power

Similar to using your lower body to absorb the shock of impact from battle rope exercises, your legs should also generate power to move the heavy ropes. By allowing your knees and hips to flex and move, you are using stabilizer muscles in your lower body to maintain balance. You will also drive the ropes’ movement with muscles in your core, legs, and upper body all at once. This is what makes battle ropes a complete workout and increases your heart rate, providing the cardio benefits of battle ropes.

If you have tried using battle ropes without employing your legs for power, you’ve no doubt felt how quickly your arms and shoulders were burnt out and unable to continue. This ultimately reduces the time under tension for the muscles, leading to a less effective workout. Battle ropes require you to recruit muscle groups throughout your body to get the best results and prevent harmful stress on your shoulders.

Use Battle Ropes in New Ways

Rather than just doing alternating up-down waves and rope slams, add some new battle rope exercises to your routine. Side-to-side waves target different muscle groups, strengthening your shoulders and upper back. Outside circles, where you make corkscrew circles with the ropes, target stabilizer muscles in your shoulders.

Battle ropes can be used in several creative ways to work your entire body, as well as put specific muscle groups at the forefront. They’re great for more than just shoulders, arms, and cardio. You can even use battle ropes for a killer chest workout.

Is it True That Battle Ropes are Bad for Your Shoulders?

The statement that battle ropes will cause shoulder injury is a myth. In truth, when used correctly, battle ropes are worth it and can strengthen several muscle groups in your shoulder, leading to increased fitness and health. In order to use battle ropes to achieve this:

These simple tips make a big difference. Not only will they allow you to avoid shoulder injury, they will also lead you to a better workout that increases your aerobic capacity at the same time you build strength and lean muscle in your shoulders. 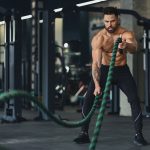 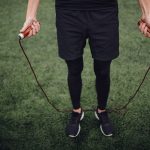