Which Workout is Better? Battle Ropes Vs. Running

Whether you’re an experienced runner exploring ways to change up your training or you’re looking to begin a fitness regimen, battle ropes are an intriguing piece of equipment. Are those ropes really as good as everyone claims? Can they give you more results than running? Let’s break down the science behind both running and heavy ropes to determine which one is best.

Battle ropes and running are comparable calorie burners. A half-hour of running typically burns 200–500 calories, depending on intensity. Typically, runners burn about 10 calories per minute at a marathon pace, so you’re likely to burn around 300 calories in half an hour. You can increase this by running at a faster pace, alternating running and sprinting, or running uphill.

Battle ropes burn a comparable amount of calories to running, with the typical number of calories burned in a half-hour workout ranging from 200–400 calories. Like running, it’s common to burn 10 calories per minute while using the ropes. So, while running has a slightly higher ceiling for burning calories than battle ropes, your typical athlete will burn around 300 calories in a half-hour during either workout. This means battle ropes are a good substitute for the fat-burning aspects of running.

When it comes to developing muscle strength, size, and tone, battle ropes are far more effective than running. At the same time, the ropes increase your heart rate and burn fat, they also develop muscles throughout your body. Although your arms appear to be doing all the work of waving and slamming the ropes, a battle rope workout recruits muscles throughout the body. You can even optimize your rope workout in order to build more muscle.

Running does help you build muscle when performed the right way. However, running mostly targets leg muscles and does not do much to strengthen your core or upper body. You’re likely to see much faster results building lean muscle with battle ropes than by running. Plus, you can follow a total body workout program to use the battle rope to strengthen all the major muscle groups in your body.

Which Has a Higher Risk of Injury?

Running carries a much higher risk of injury than battle ropes. As your fitness level increases, you’ll need to run longer and harder to challenge yourself. This increases the repetitive stress put on your muscles, bones, and joints. Runners are most prone to developing injuries in their knee, foot, and lower leg.

Battle ropes do not carry the same injury risks as running. The battle rope is a low-impact piece of fitness equipment that won’t cause repetitive stress injury. As your fitness level increases, you can build the intensity of your workout without lengthening it. By putting more slack in the rope or working faster during your exercises you’ll create a new challenge. As long as you practice correct form, you can protect your shoulders from injury when using battle ropes.

Which is Easier to Start?

At first glance, running may seem like a much easier way to begin working out. After all, you just need some running shoes and an open road, right? This is true as long as the weather cooperates. During rainy or cold months, most opt for treadmill running, which requires a hefty investment or a gym membership. Since many gyms these days have battle ropes on hand, it’s nearly as simple to start with ropes as it is to begin running. It’s also very easy to start working out with a few basic rope movements.

A much more interesting question to ask is, which workout are you more likely to stick with? Many view running as a monotonous, boring workout. This may cause new runners to give up on their program. Battle ropes, on the other hand, allow you to try dozens of workouts. And, since you’ll be constantly changing exercises during a battle rope circuit, you’ll never be bored. Most people find it easier to get motivated to work with ropes than to go on a long run.

Battle ropes are our pick in the comparison of ropes vs. running. Not only can you burn the same amount of calories with a battle rope workout as you can by running, you’ll also build more muscle and reduce your risk of injury.

When it comes down to the benefits per-minute, few workouts beat battle ropes. Because they combine cardio with strength training, you’ll get the benefits of running and weight training at the same time. This means the time you spend working out will give you a lot more results if you’re using ropes instead of running.

How to Maximize the Cardio Benefits of Battle Ropes

If you really want to maximize the cardiovascular endurance and fat burning benefits of battle ropes, explore HIIT training with a battle rope circuit. HIIT (High Intensity Interval Training) is the practice of working at maximum effort for a short period of time, followed by a rest period. When training with battle ropes, it’s common to go all out for 30 seconds, followed by a 30-second rest. Once the rest is done, it’s back to intense work. This training system boosts your heart rate and burns calories at an incredible rate.

Battle ropes are great for HIIT because you can perform so many exercises without changing weights or equipment. A good battle rope circuit combines 6–10 exercises performed one after the other to work your entire body and keep your heart rate elevated. A 10–30 minute workout will help you burn fat and build muscle.

Are Battle Ropes Good for Runners?

If you’re a runner looking to augment your training, give battle ropes a try. Because they provide an excellent cardio workout, you won’t lose cardiovascular endurance if you trade out a few days of running for rope work. Additionally, battle ropes help to build core strength and leg muscles, which will improve your running speed and endurance.

If you’re rehabilitating a running-induced injury, consider switching to battle rope workouts as you recover. The low-impact nature of battle ropes will allow you to maintain strength, or even make fitness gains, as your body heals.

Are Battle Ropes Better Than Running?

Because battle ropes provide comparable fat-burning benefits to running with better total-body strength training results and a lower risk of injury, we recommend ropes over running. Running has the potential to burn more calories than ropes if performed at high intensity, but it won’t build as much muscle. Plus, running carries a much greater injury risk. Combine these factors with the fact that battle ropes allow a wider variety of workouts, which will keep you engaged, and you’re better off buying a battle rope than a new pair of running shoes. 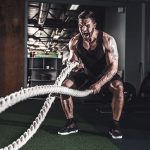 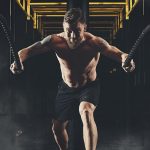