Battle ropes are an incredible total-body training tool that will work your back muscles. Many battle rope exercises activate the muscles in your back as part of a total body workout. You can also perform battle rope exercises that specifically target your back muscles for increased growth and development. Moving the ropes laterally or in circles targets the muscles in the upper back. Whipping the ropes in up-and-down motions works your lats and lower back.

How Do Battle Ropes Work Back Muscles?

Many battle rope exercises require you to use your entire body, from your legs through your upper body, to generate the power to move the rope. These big movements employ the muscles in your core for balance and stability. This activates the muscles in your lower back, strengthening them.

When choosing rope workouts with the intent of targeting your back, consider performing exercises in a seated position. Without the ability to generate force using your lower body, you will recruit more muscles in your upper body, including your back. Exercises where you slam or wave the ropes downward will use your lats. Movements that bring the ropes in a lateral (side-to-side) or circular motion will target your upper back muscles.

As with any workout, correct form while using the battle ropes is essential. To perform a workout safely and prevent injury to your shoulders and lower back, follow these rules:

These quick rules will keep you safe throughout your workout. Once you’ve mastered these basics, you can explore ways to maximize the muscle-building potential of your battle ropes workout.

5 Best Exercises to Target Your Back with Battle Ropes

When it comes time to get a back workout with the heavy ropes, there is a selection of exercises that will target the muscles throughout the upper and lower back, including the muscles at the rear of the shoulder. The movements below can be tailored to any fitness level in order to build strength and muscle in your back.

This exercise is designed to target the rear deltoids, rhomboids, and trapezius muscles. In layman’s terms, this means the lateral whip provides a workout for the muscles at the rear of the shoulders, between the shoulder blades, as well as the muscles that run from your shoulders up the rear of your neck. To perform it:

As with the other exercises on this list, lateral whips can be performed as part of a battle rope circuit or in a more traditional “sets and reps” style. For a battle ropes circuit, choose 5–10 exercises. Perform each one once, with 60 seconds of rest between exercises, then restart the circuit from the beginning. For sets and reps, perform the exercise for 30-seconds, rest for 60 seconds, and repeat this cycle 5 times.

Alternating waves are the cornerstone of any battle ropes workout. With so many variations, this movement can provide a total body workout or isolate specific muscle groups. By performing vertical waves in a seated position, the force to move the rope comes from the upper body, which activates the back muscles. For this exercise:

The up-and-down motion of this exercise uses the lats (the big muscles on either side of your back) to generate force to bring the rope down. To further increase activation of the back muscles, focus on using the full range of motion to flick the ropes down with force.

This is a bit of an unorthodox battle rope workout since it involves lying face-down on the floor while gripping the ropes, but it’s an excellent back workout. It will target your rear deltoids and trapezius muscles, but it will also strengthen core muscles in your lower back. To perform this battle rope exercise:

Unlike most battle rope exercises that rely on speed, you’ll get the most out of the lying T by keeping your muscles under tension by holding the top position. By the time you get to the end of your set, your upper back will be burning from the workout.

The jump slam is a battle rope staple. You’ll use your whole body to bring the ropes overhead with your arms extended, but it will be up to the muscles in your shoulders and back to slam the ropes back down hard to the ground. For this exercise:

Although you can perform rope slams in a seated position, it’s tough to generate enough power to get the full range of motion without the help of your lower body. By fully extending your arms overhead you’ll use the entirety of your lats to help bring down the rope in a powerful slam, leading to stronger, more defined back muscles.

Moving the battle ropes in circular motions is an excellent way to activate the rear deltoid and rhomboid muscles in your upper back. The circular motion also uses stabilizer muscles throughout your back to maintain the balance and rhythm of the ropes. Outside circles are the best circle-type exercise for your back. Here’s how to do it:

For an extra challenge, perform outside circles in a seated position. This will put increased focus on your upper back muscles.

Can You Build a Strong Back with Battle Ropes?

You can build muscle and strength in your back by performing the right battle rope exercises. The following exercises are excellent for targeting muscles throughout the upper and lower back.

Movements that move the ropes in in-out movements or circular movements will target your upper back. Compound movements performed while standing will activate the core muscles in your lower back. Making up-down waves in the rope will recruit the lats and other muscles throughout the back. Mix all of these types together for the ultimate battle rope back workout. 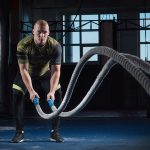 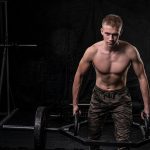